You may have been seeing the warnings about ticks on the news, this year especially, as ticks are out in record numbers due to an unusually warm winter. The media will tell you to use repellents, dress in light colors, wear long pants, and do tick checks. These are all good steps to take to prevent a tick bite, and an infection of a tick born illness such as Lyme Disease, but sadly, they may be ineffective, and pointless, the majority of the time.

They are very small, even as adults. Nymphs, are responsible for the most bites, according to various sources. Many of these sources also state that a tick must be attached for a period of hours in order to transmit an infection of Lyme, or other vector borne disease. I have doubts about this theory, but then again, I question everything when it comes to Lyme, and the “official stance” taken by the CDC, IDSA, and the Government in general.

Chances are, like me, you will not find an attached tick, or even know you were bitten. You will not develop the tell tale bulls-eye rash, or even feel sick.  This disease is nothing if not stealthy. The spirochetes, that are the Lyme Disease Bacteria, give off chemicals that convince your immune system NOT to attack, which in turn, will prevent your body from producing antibodies. Thus, a negative test at your doctor’s office. The frightening thing is that even without a tick bite, you may already be infected. (No one tells us this.)

Lyme Disease was “discovered” in 1975, in Lyme, Connecticut, hence it’s name. It manifested itself, first in children, who were initially diagnosed with Arthritis. The truth is, that Lyme has been around for thousands of years, so why, all of a sudden in 1975, was there a sudden discovery? Good question. I mean, after all, haven’t we always been going outside, to farm, hike, play, and camp? Haven’t there always been ticks? Of course. So why, all of a sudden is there a hot spot of disease? Many people believe that there is one obvious reason: Plum Island.

Plum Island is a small area of land off of the Northeastern tip of Long Island, NY.  In 1954, the US Department of Agriculture opened the “Plumb Island Animal Disease Center” on this tiny island.  The official blurb: “The Center conducts research on animal pathogens to protect farmers, ranchers, and the national food supply.” Because of the nature of the research, access to the Island and the research facility is restricted. – Go figure.

Although the official stance is that all test animals, were destroyed, and there was no danger, how hard would it be to lose a “test tick” or 2, considering their size? Pretty easy, I’d say. THEN…a tick lays eggs… 2 – 20 thousand at a time. One of these finds a meal on a bird, and while still attached, catches a ride to Connecticut. Simple. Not far fetched at all. Bio-warfare is real.

If you want to read more about Plumb Island, you can research it online, or purchase this book:  Lab 257

So, my point is, that a suspect “infected” tick, could have been taken anywhere, and because there are not always symptoms, at any time, after 1954, there could have been infections of humans. Now, the official stance of “experts” is that Lyme Disease can ONLY be transmitted through a tick bite.  I find this hard to believe, and I’ll tell you why.

Lyme Bacteria is a spirochete. This means it has a spiral shape just like Syphilis. As we know, Syphilis is a sexually transmitted disease. It can also be passed on to your child in utero, and no doubt during blood transfusions. This is why the donated blood is tested for it. The American Red Cross does not however, test for Lyme Disease. Draw your own conclusions there.

I have Lyme Disease. I was diagnosed 3 years ago. I have been treated with oral, and IV antibiotics. I am still very ill.

I was born in 1964, on Long Island, roughly 90 miles West of Plum Island as the crow flies. In 1970, we moved to Connecticut, and had a home that was, again roughly 100 miles, (NW) of Plum Island. I played in the woods, I had pets. Indoor/Outdoor pets. No one ever checked for ticks. At summer camp, no one checked for ticks. I don’t recall ever being bitten by one or seeing one. The only thing I can remember is having a few years of what the doctor called “growing pains”. All of those years growing up I could have been infected. I have had pain in varying degrees all of my life. During my young adult years, (24, and 26) after childbirth, I was twice given blood transfusions. All of those years, I could have been infected, yet until 3 years ago, it did not disable me. My children, and grandchildren could also be infected, and may never know it. All of our sexual partners could have been infected, and we would not know. Think about the implications of that.

The CDC states that there are 300,000 new cases of Lyme Disease reported each year. That means, that the cases were reported, and confirmed using CDC, and IDSA criteria. Since testing is rarely accurate, or for that matter performed without insisting, the number of cases is probably much, much higher.

Regardless of what you believe, or what the medical profession as a whole believe, Lyme Disease, and it’s chronic stage are real, and in many cases debilitating. People who have it are being misdiagnosed, mistreated, and in some cases, deemed mentally ill. I do not say these things to scare you (but you should be scared). I repeatedly post to educate you, and prompt you to do your own research. Do not just assume. Do not take anyone’s word for it. LOOK IT UP!!!!! 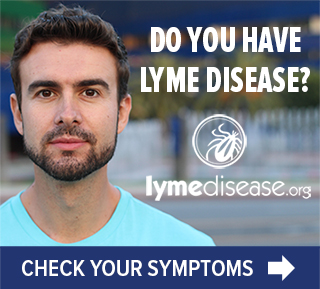 "books are the quietest and most constant of friends: they are the most accessible and wisest on counselors and the most patient of teachers" - charles w eliot